Hi! My name is William, though I normally use my nickname, Bill. You can use either name.

I’m the owner of Phantasy Photos LLC. My wife helps me out sometimes with clients, Facebook posts, studio set design, and a few other things. I’m also your Certified Professional Boudoir Photographer.

Although I probably started out in photography with a 135 and/or 110 Instamatic camera… you know those cameras that had film in a cartridge and used flash cubes… I consider my first serious foray in the photography field when I took a photography class in junior high (middle) school. Then another one in high school. In those classes, I not only learned about how a single lens reflex camera works, but also about composition, framing, lighting, and more, and how to develop black and white negative film and create black and white prints.

During my high school photography class, my step-grandfather gave me his Argus C3 MatchMatic. I thought I’d lost it during one of my many moves, with my family and during my time in the United States Air Force, but my mom had it packed away in a box. She sent it to me. I still have it, and it’s still in good working condition. When I graduated high school my parents and grandparents pooled their money and bought me a Konica AutoReflex SLR for graduation. I still have it too. And it still works just fine.

Over the years, I sporadically photographed things, mostly landscapes, sunrises and sunsets, wildlife, and on occasion, thunderstorms. I never really cared to take photos of people, except perhaps in candid situations. I remember taking photographs of various aircraft when I was deployed to Incirlik, Turkey during Operation Provide Comfort, but I’m pretty sure those photos got lost in one of my moves. In any event, I never really took photography seriously or engaged in it with any regularity until the spring of 2015.

I had lost my job. My wife had a good, well-paying job, working from home. I didn’t want to distract her, so on the days that I wasn’t filling out applications and submitting resumes for jobs, I grabbed my camera and went out into the local area to photograph anything and everything I saw that interested me. I took photos of the Fabulous Las Vegas Strip: Eiffel Tower, Arc de Triomphe at Paris Las Vegas, Bellagio, Luxor, MGM Grand, Tropicana, New York New York, Excalibur, and the famous Welcome to Fabulous Las Vegas sign. I took photos of Fremont Street and the Downtown Las Vegas Arts District, Red Rock Canyon, Exploration Peak and more.

In 2017, I decided I wanted to try working with people. I found a few ladies who were willing to work with me, ether TFP (time for prints) or as a paid model, so I could give it a go and see if I liked it. And I did. In May 2017, I started my photography company, initially called PhotosByWLG, then switched to William Gentry Photography. Now that I’ve decided to focus on boudoir photography, I changed the name again to Phantasy Photos. So that’s where I’m at.

I use a Nikon D850 DSLR camera. My go-to lens for boudoir is a NIKKOR f/1.8 35mm lens. Sometimes I use a NIKKOR f/1.8 50mm lens. Occasionally, usually when I’m doing an outdoor session where there is more space, I’ll use a NIKKOR f/1.8 85mm lens., And, if there’s ever a need for some photographic trickery and magic, I can use a Rokinon f/2.8 14mm lens. I have a Nikon D3300 DSLR camera as a backup camera. I also have an Olympus C7070 prosumer camera that I primarily use to shoot behind the scenes video, and as a last resort backup camera. I also have a Polaroid One Step+ camera that I use during sessions. I take a couple of shots with it. One is given to the client as a surprise takeaway after the session is over. The rest I have signed by the client to display in my studio. 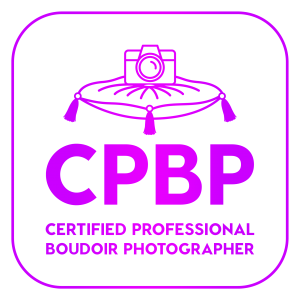 In October 2018, I enrolled in a program, offered by Boudie Shorts LLC, to become a Certified Professional Boudoir Photographer. I did this not because of some sense of pride or to show other photographers that I’m certified. In fact, in the photography world, this certification means absolutely zero… nothing… zilch… diddly squat. I enrolled because I knew that the program would help me become a better boudoir photographer and a better business owner. I did it because I felt that it would help prospective clients trust me, a stranger and a male photographer to boot, to take their intimate photographs; to help them feel safe and comfortable in my studio, knowing that with the badge at left, certificate, and crystal plaque, I value and respect them as clients, and work with utmost professionalism and ethics.

In addition to the Certified Professional Boudoir Photographer program, I have studied with other renowned boudoir photographers and educators, including Marissa Boucher, Michael Sasser, and Denise Birdsong. These educators and their courses provide me with additional knowledge and skills to give you an even better boudoir experience.

There are times that I will take a client or model on location to  do something super creative, such as a cosplay set that screams the need for a specific outdoor setting.

The background photo is a self portrait I shot in November 2017 at Valley of Fire State Park near Overton, Nevada. To date, I’ve done two photo session near where this photo was taken.

When I’m not working with clients but need my photography fix, I enjoy getting outdoors to photograph landscapes, sunrises and sunsets, wildlife, flowers, the Milky Way, the stars and the moon, lightning, light painting, and more.

I enlisted in the United States Air Force in September 1989 and separated on 06 December 1998 with an Honorable Discharge. My job was that of an Aircraft Armament Systems Specialist. The easy way to describe my
job is that I loaded bombs, bullets, and missiles and maintained the weapons systems on USAF aircraft. Although I could have worked on any aircraft in the USAF fleet, I was always assigned to F-16 units.

Although I did not deploy during Operations Desert Shield and Desert Storm, I am a veteran of those operations, which together comprised the Iraqi War.

I deployed to Incirlik AB, Turkey five times in support of Operation Provide Comfort and once to Aviano AB, Italy in support of Operation Deny Flight, which were real world missions. I also deployed to Soesterberg AB, Netherlands, Nevatim AB, Israel, Belgium, Denmark, Tyndall AFB, Florida (near Panama City), and Nellis AFB for various training exercises, some of which were NATO training exercises executed with other nations air and naval forces.

Besides photography, my other passion is music. I’ve played guitar since 1980. I’ve written a few songs too. I don’t play as often as I’d like, but hopefully that will change soon.

My favorite music genres are heavy metal, classic rock, and country, though I have been known to listen to every other music genre on occasion.

I like watching movies (Bull Durham, Star Wars and Marvel movies are my favorites), reading, and, occasionally, barbecue grilling.

I don’t watch a lot of TV, but my favorite, must watch shows are currently the Mandalorian (for as long as it continues) and the Expanse (anxiously waiting for season 4).

I’m looking forward to new TV series based on the Marvel and Star Wars universe.

Various Photos & Selfies Over the Years

We took a  7-day cruise for our 10th Anniversary in October 2015 (yeah, a year and a half late) to the Mexican Riviera. Departing from Long Beach, California, ports of call were Puerto Vallarta, Acapulco, Cabo san Lucas.

An impromptu photo session broke out during lunch on Day 2! A few of my fellow photographers decided to model for the rest of us. I didn’t have my camera handy as I had been talking with one of the Boudie Shorts staff about the advanced program, Boudoir Empire, and walked out to see this.
Despite not getting very many photos of the spontaneous session with my phone, or a photo of Cassie in a tree,

I did get a lot of great information to take home and implement in my business, and had a lot of fun!